Baby W turned 8 months old last Saturday and what a busy month it’s been including his first Christmas and mummy going back to work! 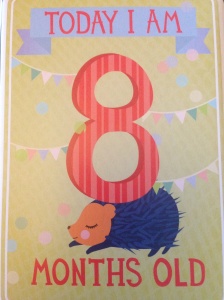 What we’ve been up to

December started off busy – my other half finally had the work exam that he’d been studying for all year. As soon as that was out of the way, he took a week off and we spent a few nights of that at my parents’ in Mid Wales.

We also had our first night away from baby W and we spoiled ourselves with a stay at the lovely Bath Spa hotel – although we missed baby W, we had a lovely night and it was amazing to get a proper nights’ sleep! He’s since spent another couple of nights with his grandparents and settles pretty well over there which is great!

I had another spa day in December – this time at Holland House in Cardiff, very nice and I will miss the ability to have random spa days when I’m back in work!

I caught a cold and 24 hour sickness bug in early/mid December which meant I missed my work’s Christmas party and it also set me back with Christmas shopping etc! The best presents I bought were creating calendars for family members using baby W’s newborn shoot – looks fab and they went down very well!

Suddenly Christmas was upon us… we spent the day with my in-laws, my sister joined us too. Nice, relaxed day with lots of food! Baby W was in a great mood all day, we dressed him up in his reindeer outfit, he tried turkey and sprouts for the first time and enjoyed some of his new presents.

We didn’t go mad with presents – we bought him a ‘lost my name’ book which is something to keep forever, I bought him a couple of other books but the best thing we bought by far was a £7 set of stacking cups etc from Mothercare – it’s provided us with hours of entertainment!

With Christmas and New Year out of the way it was time for this mamma to go back to work – I’ve just done my first 3 days back and I must admit I’ve actually really enjoyed it! The toughest thing has been another level of exhaustion which I’ll have to get used to!

Over the last month baby W also went to a christening and 1st birthday party, and went on a train for the first time!

Nothing new from last month other than he’s just got busier and busier – he doesn’t sit still and he’s getting a lot more vocal!

Although he can’t crawl, he can move around pretty well by shuffling around. He grabs everything, all the time now… he doesn’t stop!

He’s generally a happy chappy and we get smiles and giggles every day. Because he’s a busy little baby though, he does get bored easily so needs entertaining a fair bit… anything from a remote control to scrunchy paper tends to work 🙂

In December, our weekly and daily routine was all over the place. As I’ve just gone back to work this week I’m sure we’ll settle into a routine again but at the moment it looks like this:

Most nights he sleeps through now, every few nights he wakes between 1 and 3 but settles back easily after some water, a cwtch and switching Ewan the dream sheep back on.

So now the days I’m in work he goes to a childminder, I spend an hour with him in the morning before daddy drops him off and I head straight to work. I work from 7.30 to 4, pick him up at 4.30 and so I have a couple of hours with him before he goes to sleep. He’s settled in fine with the childminder and he has all sorts of fun there that I haven’t done with him like jelly play and a play in a ball pool!

Baby W’s enjoyed his food over the last month and is currently in a bit of a ‘eat everything’ phase although as you can see we haven’t dropped any milk feeds yet.

He LOVES my homemade macaroni cheese – he can eat about 15-20 pieces of pasta in one go.

We tend to give him Weetabix (spoon-fed) or toast for breakfast. Lunch and dinner we’re still going the baby-led weaning way in terms of him just eating a bit of whatever we eat.

My sister bought him an IKEA highchair for Christmas and now he sits in that instead of the snug on the table, there’s definitely a lot more mess on the floor but he loves sitting in the highchair. Mealtimes are probably the favourite part of the day for me – playing with food keeps him interested and entertained and it’s fun watching all of his facial expressions!