Last weekend I had a few free hours while W and daddy went to watch some local rugby… So I thought I’d go for some retail therapy at McArthur glen which is just about 20 mins away.

It’s actually quite toddler-friendly… They have little tykes cars that they can drive round in, and there’s a play area.. I’m sure I will take W with me at some point but for this occasion is was nice to have some mummy time… And I ended up topping up his autumn/winter wardrobe with these beauties…. First off Gap where I got 2 long-sleeved vests, a long-sleeve top, lovely warm joggers and fleece-lined jeans for £40… A bargain for Gap 🙂 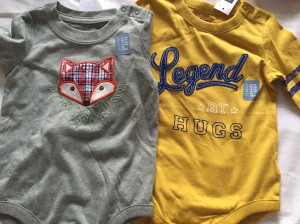 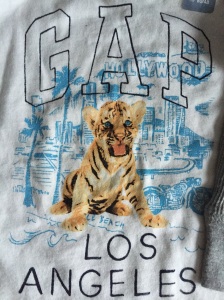 Then off to Next where I picked up this lovely waterproof, fleece-lined coat for £17

So a successful albeit slightly more expensive than planned afternoon! So lucky to have a discount outlet on our doorstep!

I used to live within walking distance from Cardiff bay…. If we wanted to nip to the local, the local was essentially the range of pubs/bars/restaurants in Cardiff bay. So I have LOTS of drunken memories there, from sunny all-dayers to Christmas parties in the comedy club. 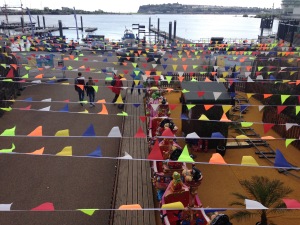 Fast forward a few years and I popped down there a few weeks ago with W for our usual Friday trip! It was the last day of the summer long Cardiff Bay beach which I thought was ok, better for older kids. W is at that stage of running off everywhere so I would have enjoyed it more if the area was enclosed and he didn’t keep running off towards the deep water of the bay! 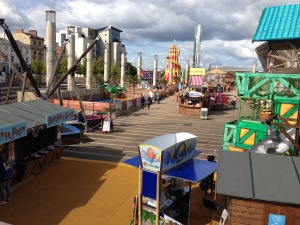 After a runaround the ‘beach’ i popped him back in buggy and headed to the Wales millennium centre. Should have taken a photo but it’s a lovely armadillo-type building which hosts shows etc. it has a large indoor lobby and I knew they had a kids area. This seemed to be having a bit of a refurb but they did have 2 tables of Lego out so W was in his element just playing with these new toys!

Again, he eventually kept trying to escape (I really need to sort this out haha!) so it was time to leave (would Defo take him back there on a rainy day!!) and I thought I’d push him across the beautiful barrage where I knew there was a play area….

On the way there I stumbled upon a little park that I’d never noticed before, nestled between a pub I used to frequent and the Norwegian church. It was perfect for W… Not too big but enough space to run around, totally enclosed and we had the place to ourselves!

As I sat there watching him running round like a loon while I chilled out for 5, I guess it just struck me how places take on a different life when you’re a parent! I must have walked past this park a hundred times and never noticed it before, and over time I’ll probably know where all the soft plays are in Cardiff but not have a clue where the best pubs are (actually I think that’s already happened!)

A couple of weeks ago I finally made it to Chai street in Canton, have wanted to go there for ages and it was well worth the wait….

I love the decor, a bit quirky… Indian film posters

I went there with my sister and we both ordered the Chai special thali for a bargain £9.95…

I think they mix up what you get but we were treated to the nicest ever onion bhaggi as a starter, the most tender chicken and lamb curries, and amazing-tasting lentil dhal and a potato dish….

Delicious!! With the rice, naan, poppadoms… It defeated me! Very good value for £9.95, great quality and amazing flavours!

The mango lassi was suitably sweet and refreshing…. 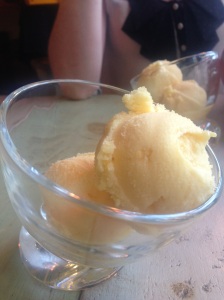 The bill was presented with this very cute bowl of sweets…. Unfortunately for me their prettiness fooled me and before you knew it I was munching on a mouthful of aniseed. Dang. 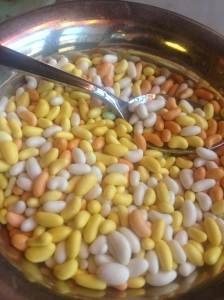 Don’t let that put you off! I really enjoyed our meal at Chai street, the food was delicious and didn’t feel too heavy, was great value and left me wishing I could eat more!

I’ve not been to their parent restaurant, Mint and Mustard, but I must give it a try after this! My favourite Indian restaurant in Cardiff up until now has been the Purple Poppadom but I think Chai street is for the more informal, early dinner.

It’s quite a small place, and you can’t book… So get there early so you don’t miss out… Hopefully I will see you there 🙂

Small print: I wasn’t asked or paid to review this, just wanted to share a great restaurant with you 🙂

If you enjoyed reading this you might enjoy my review of the street food at Depot, Cardiff... Or maybe try exploring Rhiwbina!?

I’m so glad a blogger started the #SaveSyriasChildren campaign over the weekend to raise money and awareness for the plight of the Syrian refugees…..

As did countless other people… I cried watching the footage of the little boy washed up on the beach. There’s no nice way of saying this but the impact of his death, and the image, was probably up there with that of world leaders. One poor little boy got the world interested in the situation, he humanised statistics and numbers and finally people started saying ‘it could have been me’ or ‘it could have been my child’ which turned into that blogger campaign I mentioned.

The reason I’m writing this though is because despite this overwhelming public support for the refugees, I’m so, so angry about the (hopefully small) minority who not only don’t want to help, but would actually wish tens of thousands of people dead.

What is wrong with these people?! How did you ever grow up to be so selfish and cruel?

‘Our services are too stretched’

Our NHS, schools, police etc might all be stretched but that’s not because of immigrants… The Tories made savage cuts over the last few years in the name of austerity and were voted back in for more of the same. Fact. So did you vote for them? Or were you one of the many millions who didn’t vote? If so, the stretched services are your fault, not theirs!

‘‘We need to look after our own first… What about our elderly and veterans?!’

See above… The nation voted in a party that cut budgets for society’s vulnerable. Fact. You don’t have to financially support one person over another…. Choose to support everyone who needs help! You could have voted in a party who wanted to tax the rich to help the poor, not a party who are favoured by the rich bankers who nearly brought the country to its knees.

Don’t fall for the UKIP or even Tory propaganda… It’s much easier for them to blame immigrants for the poor state of our services than it is to actually invest in them eg by building affordable homes to first time buyers maybe by taxing the millionaire Chinese and Russians that have pushed up London house prices beyond the reach of most Brits. (actually that reminds me, why don’t Ireland offer to take in some refugees? They literally have tens of thousands of empty houses that could be filled!)

They might be, but if you were a Syrian terrorist who wanted to attack the UK, you’d probably find a smarter way than spending weeks trekking across Europe risking your life in dinghies!? Or maybe you’d stay in Syria for some of the fighting fun?!

These people are like you and me, mothers, fathers, children…. Workers, business people, teachers…. What makes them any more likely to be terrorists than us?! Having lived in such an unsafe environment for so long they are probably less likely actually, after seeing the damage it causes!

‘They should go back to where they came from’

Ummmm they would probably love to if their homes and towns hadn’t been bombed. Would you like to live in a bombsite?! If you were worried for your life, would you stay at home and wait to be killed… Or escape for a better life?!

‘Why do they all want to come to Britain?! They just want our benefits‘

You can easily check your facts on this one. They would actually prefer to head to places like Germany where they will receive greater care. There are plenty of sources that confirm that Britain takes a very low proportion of migrants compared to other countries.

This one’s my fave as I’d love to know what their British culture looks like…. Do they eat a McDonalds (American) for breakfast, a pizza (Italian) for lunch, a Chinese takeaway for dinner and then do some late night shopping (brought to the UK by Indian/Pakistani shopkeepers!) Do they watch American films on their American-designed, made in China iPads?!!

We live in a globalised society, get over it…. Countries change as technology and culture change. Twenty years ago, who would have that picking up a coffee on your way to work would be part of your daily routine… Or posting ‘selfies’ at a bunch of people you have never met.

We are one planet, one people… You are only better than someone else if you show more love and compassion to other people. One love.

W is nearly 16 months old and is still in 9-12 month bottoms, but 12-18 month tops…. we have a million T-shirts but as the weather is getting cooler it was time to get some new items for the next few months…

First off, Zara – I really love their clothes… some of their long-sleeved tops are £8.99 each but these 2 were only £2.99 each and are made of organic cotton…

I love Zara leggings, some we previously bought lasted really well so we bought these 2, I think they were £6.99 each… the ‘wolf’ ones are a much brighter yellow than they look here…

Now some basic tops from Mothercare… these packs of 3 were £12 and the quality feels amazing for the price!

Some more bottoms…. the ones on the left are from Tesco and are speckled with colour, the ones on the right are from Mothercare (Jools’ Little Bird) – I love the way they look like yoga pants. Today he’s wearing those with the yellow Zara top and he looks well cool!

These are a bit boring, but you can’t go wrong with joggers – I picked these up as they were 2 for £8 in Boots – bargain!

And finally, I couldn’t do a haul post without showing off another Little bird top… I get one for him every few months….

So there we have our Autumn wardrobe sorted – for the cost of about £60? £70? Now all I need to get is some proper Wintery things like coats, jumpers and wellies, but these should keep him warm enough for now!

If you enjoyed this, you might enjoy our previous hauls!