I’m not a particularly nervous person but I always worry a bit about health visitor checks! For baby S’s 15 month check I was worried he’d show up as underweight and a bit behind on development milestones as he always seems a bit behind what his older brother was doing! 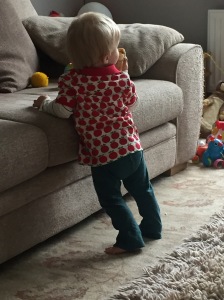 I didn’t need to worry, he passed with flying colours. This may vary by region but here’s the checklist we talked through in his check-up:

So all in all a good visit. He’s had a tough few weeks of teething but seems ok again at the moment. Still loves music and his big brother!

Talking of his brother it’s always nice to compare their updates – funny they both had 12 teeth by 15 months, funny I was calling W a toddler but S isn’t quite toddling yet so still our l’il baby!