We recently hosted a birthday party for our 3 year old and, having not organised a children’s party before, I found the run-up quite stressful! So thought I’d share my tips so your preparations can be as stress-free as possible 🙂

I guess you start with how many children you want to invite. W doesn’t have a huge amount of playmates, so we had a list of about 10 but then it quickly grew once we added some of his cousins, family friends etc. Before we knew it we had 25 children confirmed (but it soon went down, and on the day it was 18 – which seemed like a perfect number!) 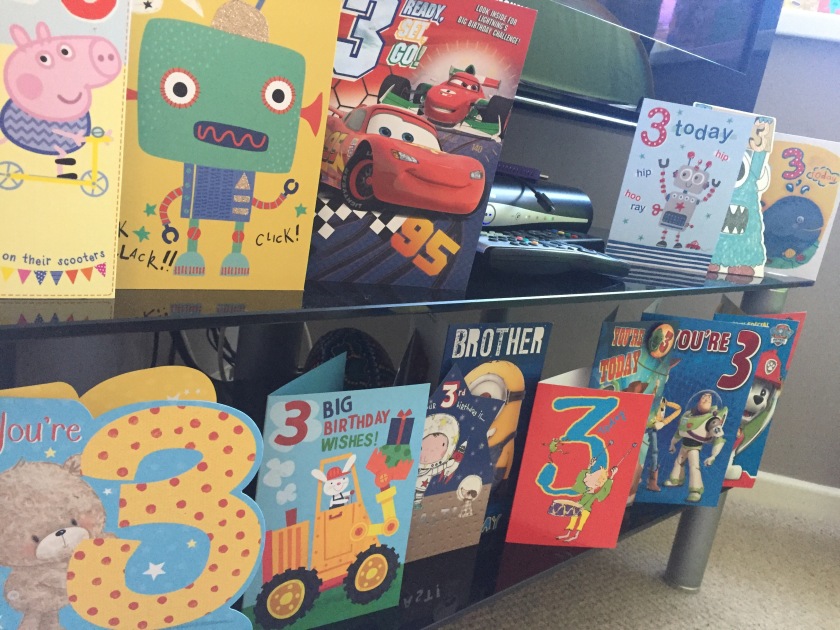 This is one of the things that stressed me out most – where to host it!!?

Home: Nobody seems to host parties at their home any more but I definitely would have considered it if we had a bigger house! A garden party would be lovely, if only you could guarantee the British weather!

Village hall: If your house isn’t big enough, you could always hire out your local church hall/ scout hall/ village hall. From what I understand these are really cheap to hire (£20-£40 ish e.g. Rhiwbina Baptist church hall is £40, Maes-y-coed community centre is £50) some of them have lots of toys to play with, and most will have kitchen facilities. You could hire a bouncy castle and softplay equipment to go in the hall from local companies like Cardiff Event Hire for about £100. Some halls have an outdoor area which would be fab!

Softplay: We thought about a softplay party – for example toddler-friendly WamBam Boomerang’s has party options starting at £6.50 per head including food (so would have cost us about £130) and you can pay extra to have exclusive use. We were close to booking this as W loves WamBam’s, but then we thought he loves it a bit too much and it might be a bit overwhelming for him! Great value though – most of the other play places have party packages e.g. Zone on Penarth Road and Mambo’s . Actually a play area we love is Play loft in Whitchurch which is REALLY toddler-friendly and only costs £80 for exclusive use, but the parking there isn’t great. (involves crossing a couple of roads).

Leisure centre softplay: After debating the local hall in Danescourt, and WamBam options, we ended up going down the council leisure centre route – Fairwater leisure centre is just down the road from us so very handy. We paid £130 (I think!) for 2 hours in the hall with a brilliant bouncy castle and soft play equipment, and a table and chairs. I worried that the kids might get bored. They didn’t – the bouncy castle had a steps and slide too, and we really struggled to get the children off it! I would add the staff were all really friendly and helpful too. Other similar options are Llanishen leisure centre, Canton community Hall and Western leisure centre in Ely – visit the Cardiff council website for more info and be aware that all the places have different time slots etc

If you fancy this but it sounds a bit expensive, similar venues in neighbouring Rhondda Cynon Taff (e.g. Hawthorn, Church Village) have a similar set-up but think they’re closer to the £100 mark.

Other options: the only other ‘different’ thing we found, which we might consider for next year is Mountain view ranch do a Gruffalo party for £10 per head which would be fab!

When to host it

We decided on the Saturday afternoon after his birthday. Lots of people do weekday late afternoon but I think some people (e.g. working parents) might struggle to attend those. Either way, just go with what suits your toddler and his/her nap times!

So with the venue booked, numbers confirmed – do you want/need any additional entertainment? If we’d have gone down the church hall route we might have booked Hartbeeps to come in and do a fun creative play session – I take the boys to these classes quite often and they love them! Think it costs £100, so probably only works if your other costs like venue are low! We went to a 4th birthday party who had Little Fizz (or Party Fizz) as the party entertainment – they were great too (although my son was 2.5 at the time and just wanted to do his own thing!)

The one thing we did book was his favourite Paw Patrol characters to come and pay him a visit! We booked this through Hancocks – I thought it was great value at £25 for a 15 minute visit, including a card and present. They got really involved with the children, including jumping on the bouncy castle with them! I highly recommend them 🙂 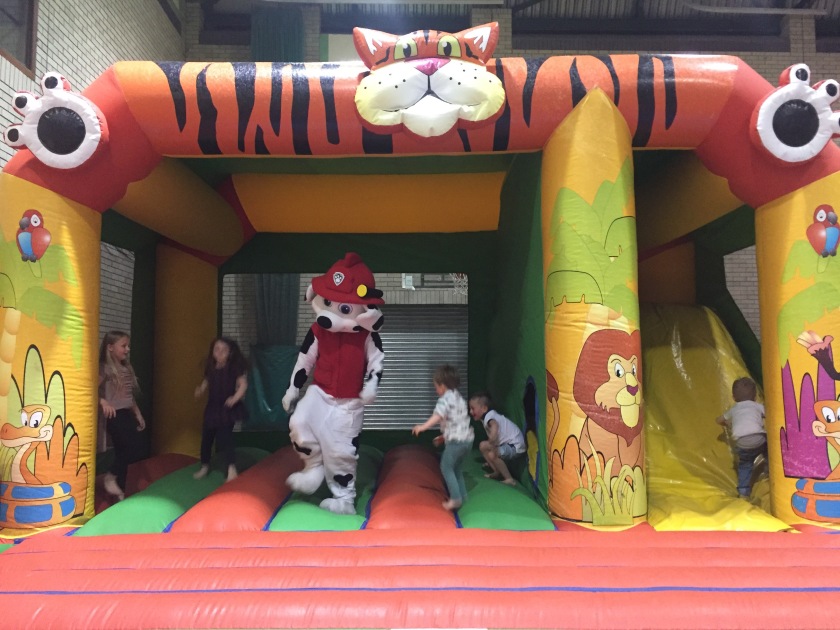 Talking of Paw Patrol, that was our sort of theme for the party. I didn’t want all the tableware to be Paw patrol (plus the cost adds up!) so we just got a Paw patrol table runner but the plates and cups we went for something a bit plainer! If you are planning a party with a theme, then Little Party People Supplies in Barry come highly recommended from other Cardiff mums – they can source the most unusual of themes for you! 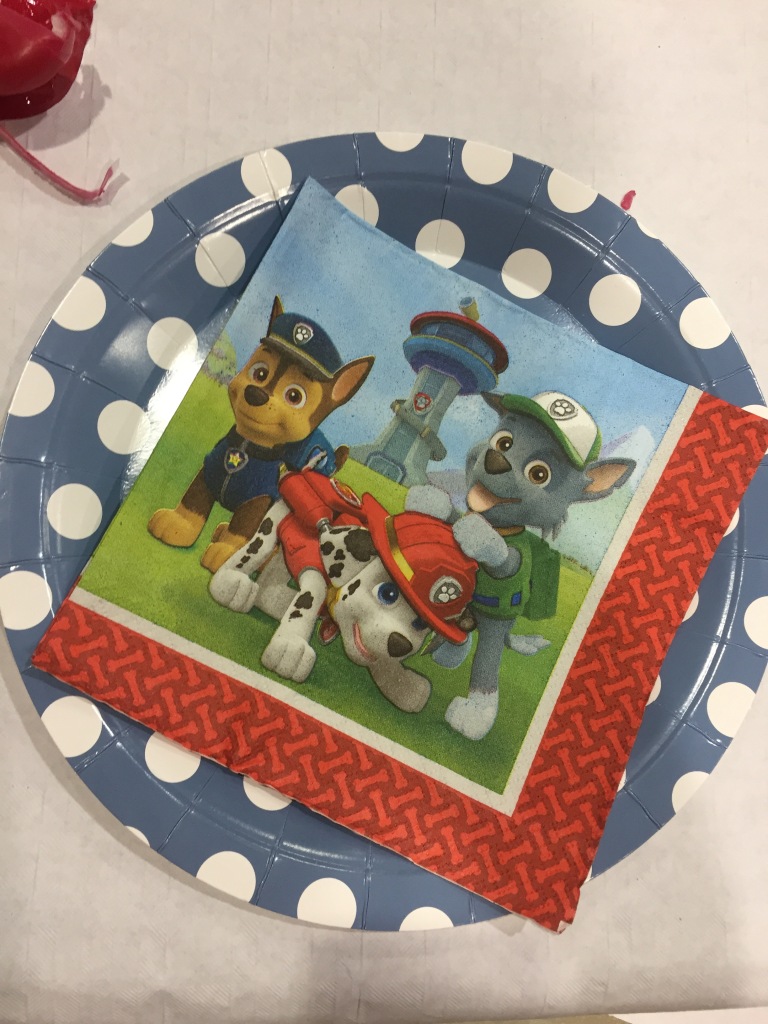 The other stressful part of the party was working out what food, and how much to make!

In the end I think we used 3 loaves of bread – used 2 for ham, 1 for cream cheese sandwiches. We bought some packs of sausage rolls, cocktail sausages, quavers, pom bears and babybel cheese. And as a healthy option, I prepared carrot and cucumber sticks. It all went down a treat and there was plenty to go around. Other options could be fruit, cheese and pineapple on sticks, pizza slices?

We’ve been to a few parties where the children’s food has already been put in little boxes for them – I did like this idea, the boxes are cute and it probably helps with organisation but I didn’t like the idea of the waste as they’d all go straight in the bin after! (Also, this can mean no food for the adults, but I like the idea of the adults being able to eat too!)

For drinks we took some jugs which we filled with water and squash.

We did, as most people seem to do, served the food about halfway through the party. The leisure centre staff kindly deflated the bouncy castle so that all the kids would sit down, and put it back up for us when we were ready – the kids literally couldn’t wait!

You
W’s aunty had got a Paw Patrol cake made for him which he was very excited about – plus cupcakes. The children all had a cupcake each, and we cut the main cake up for the adults 🙂

These can be a contentious issue for many parents who might not like a) junk food/sweets etc b) plastic tat in party bags. Now I don’t mind plastic tat, and W loves it but I thought I’d be mindful that lots of people don’t like it… so we just bought Paw patrol bubbles for the Paw patrol party bags and put a slice of cake in there (which we had prepared before the party!)

We also bought a load of Quentin Blake-illustrated books from The Book People, wrapped them in tissue paper (to avoid any fights!) and gave one to each child. The book people is great for deals – these books came in at under a pound each but the RRP is £7! We’d borrowed the idea from another party we’d been to – I think a book is a lovely gift – figured you can’t go wrong with a book and bubbles!

You Things to remember to take

Everything went smoothly in the end, all the kids including W behaved really well and even W didn’t get overwhelmed or anything. So as with most things, the anticipation was far more stressful than the event itself!

There are a couple of things that are tough about being the host/hostess – you have to split your time between all the guests, so you’ll feel guilty for not chatting to everyone properly! Also, I didn’t take as many photos as I would have liked as I was so busy chatting etc. so – in future I think I’ll ask everyone to take photos, and it’s something I’ll be mindful of at other parties we go to!

Don’t forget the ‘thank you’ cards – not everyone does these, but I do for the boys as I want them to write their own when they’re old enough. It’s an excuse for me to use websites like Vistaprint to create photo cards 🙂

Did I miss anything? Can you think of other options/tips that would be useful? If so, please leave a comment so that other parents see it! And if you found this useful I’d love it if you could share it with your friends, thank you!