This time a week ago, on a lovely sunny Bank Holiday Monday, we were getting ready to leave hospital and come home with our 9 week old boy.

On the Thursday night prior, he’d had a bad night’s sleep – didn’t want any milk (unlike him – he feeds every 2 hours or so in the night), had developed a cough and just wanted to be comforted.

Friday morning he had some milk then slept all morning – again, unlike him as he only has short naps in the day. He’d developed a bit of a fever and lost his colour. I still wasn’t overly concerned as I thought it was just a cold but I called the doc’s just in case – I was mostly worried that his terrible-sounding cough was a chest infection.

They suggested giving calpol to bring his temperature down and when we saw the doctor at 5pm she couldn’t hear anything in his chest so assumed it was viral but asked us to take him to the assessment unit in the hospital just in case.

I still wasn’t overly worried –  figured we’d be there a few hours and then home.

Wrong. As soon as we arrived, I suspect that a combination of his young age and symptoms jumped him to the top of the queue as we didn’t have to wait at all before he was surrounded my medical staff, stripped off and given blood tests, a chest X-ray and lumbar puncture. We also had to get an urine sample…. Literally by holding a sample bottle underneath him…. For 4 hours!!!

I guess I didn’t realise at the time but all his symptoms were similar to those of meningitis. Once all the tests were done they explained that some of the results wouldn’t be back til Monday (with it being a weekend) but they would treat him as if it was worst case ie meningitis/sepsis.

So baby S spent the weekend in the Children’s hospital for Wales. We had a private room in case he was infectious, which had a camp bed and en-suite bathroom! 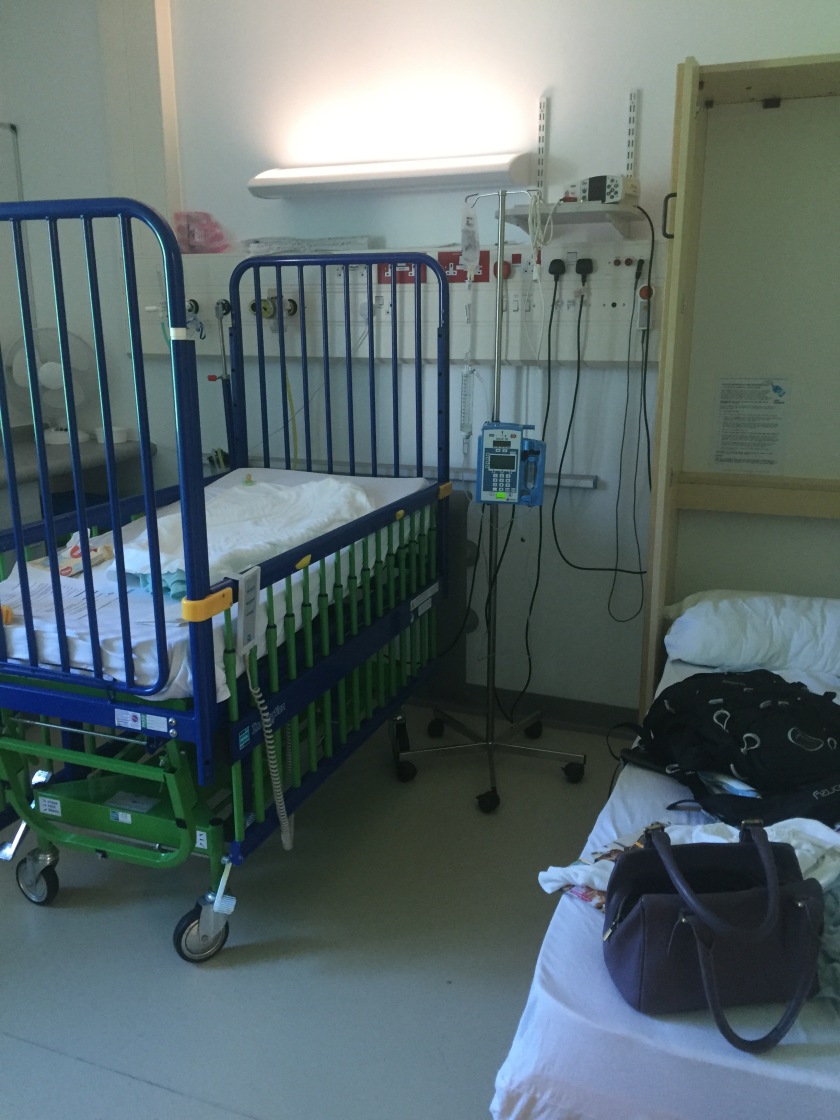 He was on two sets of antibiotics, every four hours. As he hadn’t drunk much on the Friday, he was on a saline drip Saturday. We gave him calpol a few times a day. He was hooked up to a monitor which kept an eye on his oxygen levels and heart rate. It was hard seeing him so poorly but it was even harder not being able to comfort him properly and bounce round the room with him!

He mostly slept Saturday and wasn’t happy when he was awake. (Hated all the wires/prodding etc too!) He was a lot happier Sunday and we saw some of his smiles again. One of the blood tests came back Sunday and confirmed that he had rhinovirus… The common cold!

Despite it being ‘just a cold’ we felt very affected and emotional bringing him home. That morning, a 4 week old baby had died on the same ward. No idea why or what happened but it certainly played on our minds for days after…

How lucky we are that S didn’t have anything serious and that he came home. How guilty I felt that we’d been unable to breastfeed and so he didn’t have the antibodies to fight this cold! How lucky we are that we live in a country with access to high quality free healthcare. How amazing the service was from when we arrived and through the whole weekend. How precious life is and how delicate our little babies are.